Scores Of Countries And Regions Have Imposed Travel Restrictions And More Than 20 -- Including Olympic Host Japan -- Have Ordered Two Weeks' Quarantine On Arrivals From South Korea.

South Korea has the largest number of reported novel coronavirus cases in the world outside China, with the national total passing 6,000 on Thursday. (Photo Credit: Getty Images)

Travel restrictions around the world on arrivals from virus-hit South Korea are plunging its Olympic preparations into turmoil, with some athletes considering self-imposed exile and some at risk of missing the Games altogether. South Korea is a country that takes the Olympics seriously, coming eighth in the medal table at Rio 2016 with nine golds, and fifth at London 2012 with 13. But it also has the largest number of reported novel coronavirus cases in the world outside China, with the national total passing 6,000 on Thursday, less than five months before the Tokyo Olympics.

Scores of countries and regions have imposed travel restrictions and more than 20 -- including Olympic host Japan -- have ordered two weeks' quarantine on arrivals from South Korea. Around 40 others have barred foreigners who have recently been in the country. Unless exemptions are granted, the measures make it impossible for South Koreans to take part in international competitions in those countries -- costing them ranking points and sometimes putting Olympic qualification in doubt. The national judo team were planning to arrive in Russia next week for the Ekaterinburg Grand Slam from March 13 to 15.

But on Wednesday, Moscow announced its two-week quarantine. Most of the remaining judo competitions are in countries that already have entry bans, including Turkey, Mongolia and Qatar. "What's really hard is that the list is getting longer and the situation is changing nearly every hour," said an official from the Korea Judo Association, which is trying to secure exemptions from Russian authorities. He still expected the South to compete in most of the 14 weight classes in Tokyo. "But you never know with sports," he added, "because an underdog could suddenly emerge at the Grand Slam or Grand Prix and one of our athletes could lose their spot by just a point or so."

Archery and taekwondo were South Korea's most successful disciplines in Rio, with five medals each. But the country's Olympic archery trials were postponed indefinitely this week due to the virus, and once selected the team were to take part in the Archery World Cup in May in Antalya, Turkey -- which has an entry ban. Similarly the taekwondo team would normally compete at the Asian Championships in Beirut in May, and officials are seeking an exemption from Lebanon's entry ban. 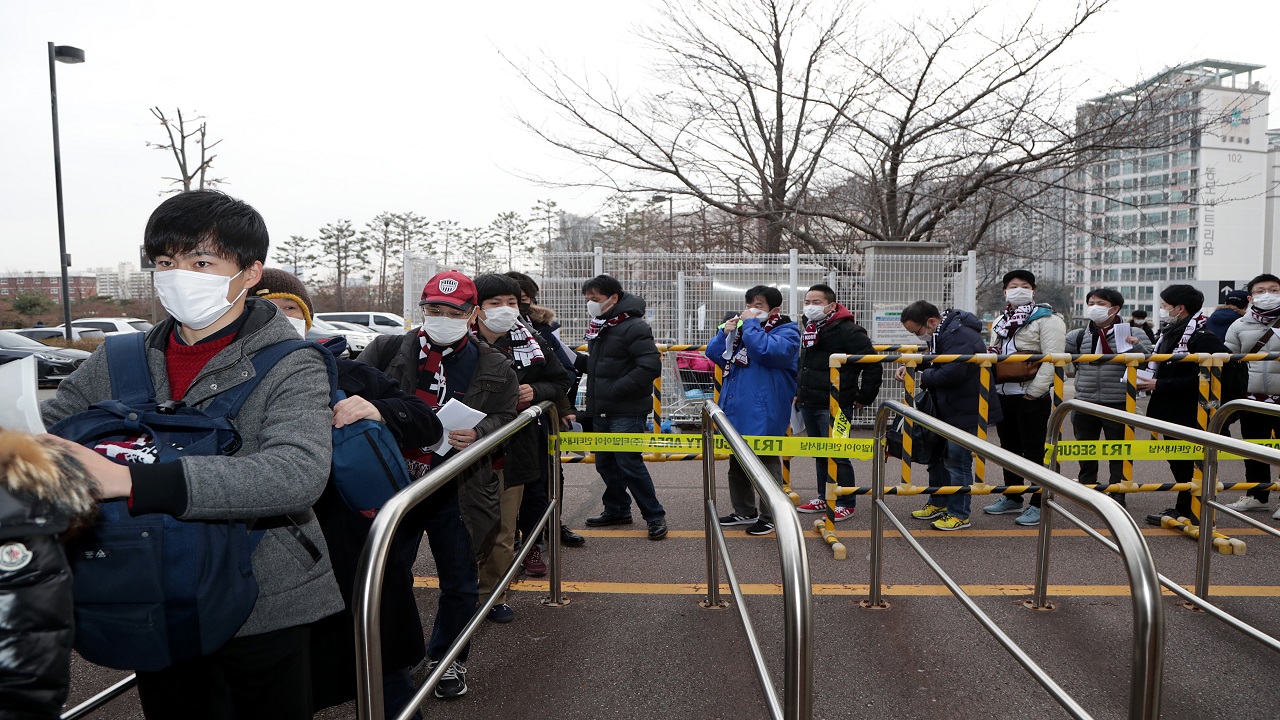 The coronavirus threat in South Korea has thrown plenty of uncertainty on their Olympic plans. (Image credit: Getty Images)

South Korean boxers taking part in the current Asian Olympic qualifying tournament in Jordan -- which has also imposed an entry ban -- were only allowed into the country after testing negative for the virus. "It was a really difficult journey," trainer Lee Sang-wook wrote on his Instagram account. Some stars rushed out of South Korea as the infection numbers climbed, to avoid the risk of restrictions. South Korea dominates women's golf, with six of the top 13 in the current LPGA rankings. Three of its players including Olympic champion Park In-bee left for the US a week earlier than scheduled amid concerns Washington could impose an entry ban, while world number one Ko Jin-young cancelled a trip home.

The table tennis team is considering heading abroad later this month and staying away to escape potential disruptions, an official at the Korea Table Tennis Association said. They have already been forced to drop out of the 2020 World Tour Platinum in Doha this week, and while they have secured a spot at the Games, missing international competitions would deprive them of chances to improve their world rankings and Olympic seedings. "We don't know which country will be next in banning South Korean arrivals so going abroad as soon as possible is the safest bet," the KTTA official said.

KTTA chief Ryu Seung-min was due to meet International Table Tennis Federation officials this week in Singapore -- which has imposed an entry ban. "If even this can't be done, we are in near-isolation," Ryu wrote on his Facebook page. For the weightlifters, the situation is even more precarious - Olympic spots are allocated at the end of April based on ranking points at six competitions since 2018, and the South Korean team has only taken part in five so far. The sixth was going to be the East Asian Championships in Seoul in February, but the event was postponed over the coronavirus. Next month's Asian Championships in Uzbekistan are in doubt, on top of which the country has a quarantine requirement.

"At this point, no one knows who is going to the Olympics," a Korea Weightlifting Federation official told AFP. The Korean Sport and Olympic Committee said it had implemented safety measures including banning athletes from leaving the national training camp in Jincheon, which was being disinfected on a daily basis, and was in talks with the International Olympic Committee to try to ensure continued participation.