Just before 72 hours this announcement, Kurt was inducted into the Hall of Fame of WWE as the lead member of Class of 2017. 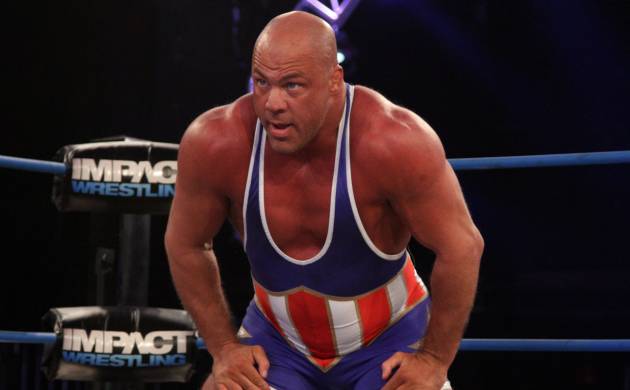 In the latest update from Wrestle Mania 33, WWE‘s star wrestler Kurt Angle has been appointed as the news general manager of Monday Night show- RAW. With this Kurt officially makes a comeback to the World Wrestling Entertainment arena.

Just before 72 hours this announcement, Kurt was inducted into the Hall of Fame of WWE as the lead member of Class of 2017.

WWE’s Chairman Vince McMahon while announcing the news, entered the ring an hour before the start of the show and made a declaration after the commissioner of RAW and his daughter Stephanie McMahon got severely injured during her husband Triple H’s match at Wrestle Mania 33.

With former RAW general manager Mick Foley being shown the exit door a few weeks ago, Angle became a probable show to lead the show.

As soon as the announcement was made, the crowd erupted in joy and chanted the slogans of "You suck" and  ‘Welcome back’.

Delighted by crowd’s response, Angle said, “I only have one thing to say: It’s great to be back on Monday Night Raw! Oh, it’s true—it’s damn true!”

Kurt Angle, NCAA heavyweight champion and an Olympic gold medalist has made a comeback to WWE after a decade-long absence. Angle in his WWE career has been the game’s 10th Triple Crown champion. In his career he won eight heavyweight titles and also became the ‘King ofthe Ring’ in 2000.

Watch the full announcement and video of the event here: