Rafael Nadal's Rogers Cup win in Montreal at the weekend marked a significant step for the Spaniard as he prepares for the US Open while Naomi Osaka returned to the world number one spot in the WTA rankings.

Rafael Nadal has skipped the Cincinnati Open after he became the number two ranked player in the world. (Image credit: Twitter)
HIGHLIGHTS

Rafael Nadal's Rogers Cup win in Montreal at the weekend marked a significant step for the Spaniard as he prepares for the US Open but it wasn't enough to topple Novak Djokovic at the top of the ATP rankings, released on Monday. Nadal, who will be vying for a fourth title at Flushing Meadows, was too strong for Daniil Medvedev in Sunday's final, seeing off the Russian 6-3 6-0 to claim his 35th Masters title. Roger Federer and Dominic Thiem stay third and fourth respectively.

Stefanos Tsitsipas, who entered the top five for the first time last week, drops two places and is leapfrogged by Kei Nishikori and Alexander Zverev. Medvedev's reward for his appearance in Sunday's final was a one-place climb to eight.

US and Australian Open champion Naomi Osaka returned to the world number one spot in the WTA rankings on Monday. The 21-year-old lost to Serena Williams in the quarter-finals of last week's Rogers Cup but benefitted from the second round defeat of former number one Ashleigh Barty and the failure of Karolina Pliskova to reach the semis in Toronto.

Osaka first hit top spot in January, after winning back-to-back majors in New York and Melbourne, making history as the first Japanese player to achieve it. After seven weeks on top, Barty slips to second with Pliskova in third. The only other movement in the top 10 sees Williams, finalist in Toronto, climbing two places to eight with Sloane Stephens going in the other direction.

Canadian Bianca Andreescu, who won the Rogers Cup following Williams' withdrawal with back spasms in the opening set of the final, climbs 13 places to 14. 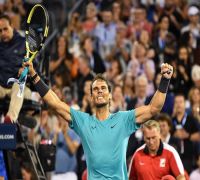 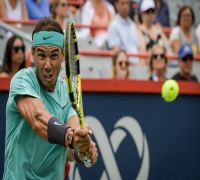 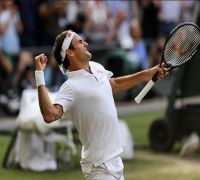