You can also spot the majestic elephant, a key figure in such festive ceremonies in most regions. Finally, the overall outline and motifs are a tribute to Mughal architecture. 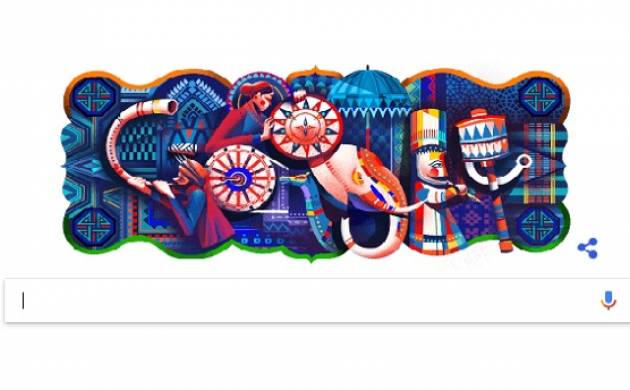 Google on Friday dedicated its doodle to mark 69th year of India’s Republic Day. The first Republic Day was commemorated with a grand parade at the Rajpath. This year, the parade includes marching contingents, various tableaux and performances showcasing the different cultures of the country. This year's parade will feature tableaux from 14 states and union territories, and nine central ministries.

‘An important element of this parade is the celebration of India’s rich cultural history, which serves as the inspiration for today’s Doodle by New Delhi-based illustrator Ibrahim Rayintakath,’ read a post by Google on its website.

The post further read, ‘The geometrical shapes that form the Doodle's background are inspired by the vibrant colours and patterns of traditional hand-loom draperies from different states. The foreground elements symbolise unique crafts, music and traditional practices from across the country. You can see a man blowing the Sringa, an ancient musical instrument; Kathputli, a form of traditional puppetry used to narrate folk tales; and the spinning wheel, an important symbol of India’s history. Ceremonial dances form an important part of rituals during the many festivals celebrated across India, and today’s Doodle depicts the Bihu dance from Assam.’

Adding, ‘You can also spot the majestic elephant, a key figure in such festive ceremonies in most regions. Finally, the overall outline and motifs are a tribute to Mughal architecture.’

All these elements of local culture in bright, warm colours and distinctive patterns are reminiscent of India’s rich cultural heritage, and come together to celebrate a happy 69th Republic Day.