The video of the king cobra who is seen drinking water from a bottle has gone viral on social media. Also in the video, the man is seen holding the snake's tail in order to prevent the attack from a cobra. 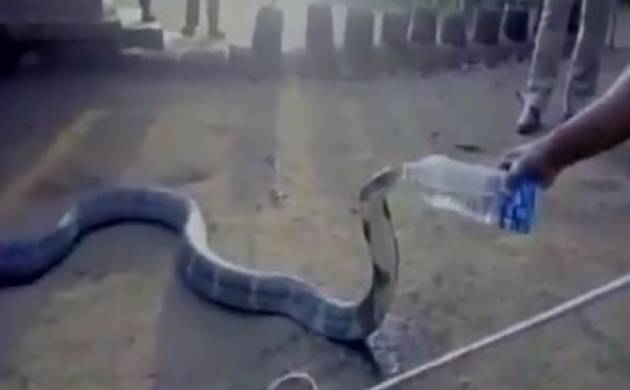 Desperate times call for desperate measures. Humans generally avoids encounter with snakes. No one takes any risk of going in front of a snake when it's a King Cobra. But, what happened in a village in Karnataka was just unimaginable.

Some kind-hearted villagers in drought-hit Karnataka's Kaiga found a king Cobra who was looking thirsty. According to reports, the King Cobra broke into the village in search for water.

When the villagers spotted the Cobra looking for water, they made the Cobra dring water from a water bottle.

One man, who was holding a snake catcher for his safety, poured a bottle of water over the head of the Cobra and the snake drank water from bottle.

The man who made the cobra drink water was assisted by his friend who held the snake's tail for his safety.

News Agency ANI on Thursday released the video of the incident that happened on March 24.