Pakistan's counter-terrorism forces have arrested the regional head of an international non-governmental organisation who is accused of receiving huge sums in the name of charity and diverting them to Al-Qaeda terrorists.

Pakistan's counter-terrorism forces have arrested the regional head of an international non-governmental organisation who is accused of receiving huge sums in the name of charity and diverting them to Al-Qaeda terrorists.

He has been accused of diverting the funds collected in the name of charity to Al Qaeda, the official added.

On Saturday, Nawaz was presented before an anti-terrorism court, which handed him over to the CTD for three days for further interrogation.

According to the FIR, there were intelligence reports that Nawaz, Mohammad Farooq Awan, Shah Rum and Mohammad Naeem were providing funds to terrorists.

It said that the CTD received a communique from the Federal Investigation Agency against them, alleging that they were receiving huge sums in the name of charity, which were being diverted to Al Qaeda to be used for terrorism.

It said that millions of rupees had been transacted from 11 bank accounts of the charity and Nawaz was unable to provide satisfactory answers regarding these funds. The suspect was then booked under Section 11-N of the ATA, 1997, the paper reported.

Representatives of the international non-governmental organisation were unavailable for comments when approached, the paper said.

The move comes as the US, the UK, France and some other prominent countries voiced concern over Pakistan's failure to do enough to contain terror funding on its soil.

The Financial Action Task Force (FATF), which placed Pakistan on the grey list in June last year of countries whose domestic laws are considered weak to tackle the challenges of money laundering and terrorism financing, asked Islamabad to complete its action plan against terror funding by October or face action.

The Paris-based global body, working to curb terrorism financing and money laundering, has asked Pakistan to reassess the operation of banned terrorist outfits in the country. 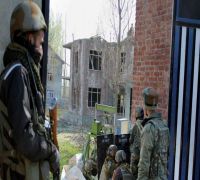