For the moment, the pull-back focused on Ras al-Ayn, a town that has been a major battle zone since Turkey launched its invasion October 9. 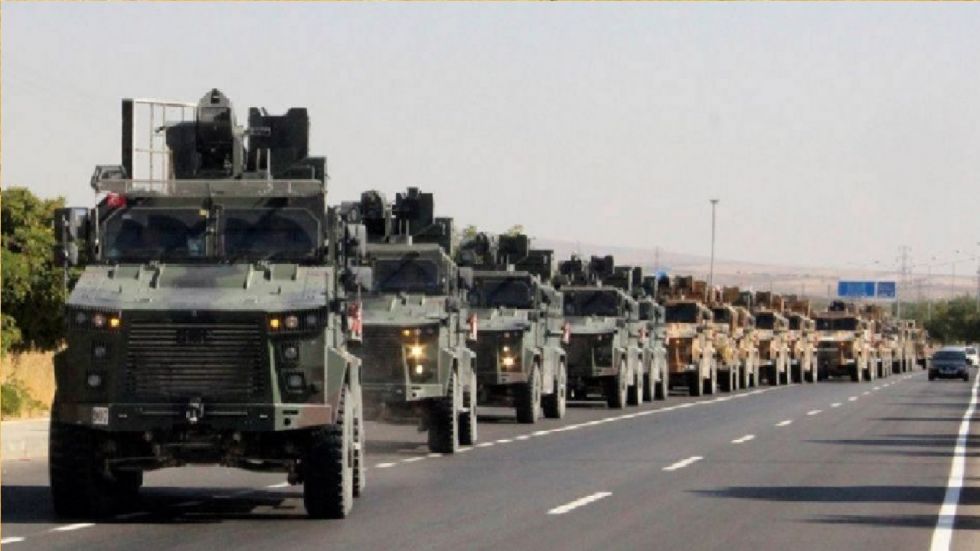 Turkey says it wants a “safe zone” clear of the Kurdish fighters, whom it considers terrorists. (Photo Credit : File )

Dozens of vehicles rolled out of a besieged Syrian border town, evacuating Kurdish fighters and civilians and opening the way for Turkish-backed forces to take over in the first pullback under a three-day-old US-brokered cease-fire. Kurdish officials say the evacuation of the town of Ras al-Ayn will be followed by a withdrawal of their forces from a section of the border with Turkey, a central requirement of the cease-fire deal. The withdrawal is supposed to take place before Tuesday evening, when the pause in fighting is set to end. Still, questions remain over longer-term arrangements.

Turkey says it wants a "safe zone" clear of the Kurdish fighters, whom it considers terrorists, across the entire northeast border. That is far longer than the territory the Kurds will leave under the terms of the deal. The Trump administration negotiated the accord after heavy criticism at home and abroad that it had opened the way for the Turkish invasion by abruptly removing its soldiers from northeast Syria. That move abandoned the Kurdish-led force, which was allied with the Americans in the bloody, years-long campaign that brought down the Islamic State group’s rule over nearly a third of Syria.

For the moment, the pull-back focused on Ras al-Ayn, a town that has been a major battle zone since Turkey launched its invasion October 9. The cease-fire deal only calls for fighters to leave. But Kurdish civilians fled in the convoy as well, fearing atrocities by the Turkish-backed Syrian forces.

Those fighters, who are Arab and often Islamist extremists, have been accused of killings of Kurdish civilians and captured fighters during this campaign and in other Syrian territory seized in Turkish campaigns since 2017.

That flight of civilians is likely to be repeated in other areas the fighters withdraw from, though most have already fled their homes amid the past days of fighting. Turkish TV showed a line of vehicles driving through agricultural areas out of town Sunday. The Turkish military said at least 86 vehicles were involved.

The convoys passed through corridors opened by Turkish-backed forces and headed to the town of Tal Tamr further south. Just before nightfall, a spokesman for the Kurdish-led forces, Kino Gabriel, wrote in a tweet that the evacuation was complete. “We don’t have any more fighters in the city,” he wrote.

The Kurds had been holed up for days in a small pocket on the southern edge of the city, surrounded by the Turkish-backed fighters and engaged in clashes well after the start of the cease-fire. The SDF said 16 of its fighters had been killed and three wounded the past 24 hours. Both sides accuse each other of repeatedly violating the three-day old cease-fire.

Turkey’s Defense Ministry said one of its soldiers was killed Sunday in a Kurdish attack with anti-tank weapons and small arms fire near the border town of Tal Abyad. That brought the Turkish military’s death toll to seven soldiers since it launched its offensive on Oct. 9.

A senior official in the Kurdish-led forces, Redur Khalil, said that after the Ras al-Ayn evacuation, the forces will withdraw from a zone about 120 kilometers (75 miles) wide and 30-kilometers (20 miles) deep between Ras al-Ayn and the town of Tal Abyad further west.

That area has been the main theater of fighting during the offensive, causing the flight of tens of thousands of civilians - Arab and Kurd - from the villages that dot the landscape. At least 160,000 civilians have been displaced by the Turkish assault.

Significant issues remain over the arrangements at the border. A previous agreement between the US and Turkey over a “safe zone” along the Syria-Turkish border foundered over the diverging definitions of the area. Erdogan has said the Kurdish fighters must withdraw from the entire northeastern border from the Euphrates River to the Iraqi border, more than 440 kilometers (260 miles). US officials say the agreement pertains to the 120-kilometer section.

Erdogan’s spokesman, Kalin, confirmed that is the area affected by the pause in fighting, but said Turkey still wants the larger zone. Turkey says it also wants to settle some of the 3.6 million Syrian refugees on its soil in the safe zone.

Another question is what the arrangement will be along the rest of the northeastern border, most of which remains solely in the hands of Kurdish-led fighters. When they were abandoned by US troops, the Kurds turned to Russia and secured an agreement for Syrian government forces to deploy in the northeast last week.

So far, the Syrian forces have only moved into one location directly on the border, the town of Kobani, and a few positions further south. Erdogan is to meet Russian President Vladimir Putin in the Russian town of Sochi on Tuesday.

His spokesman Kalin said he will tell Putin that Ankara does not want either Syrian forces or Kurdish fighters along the border because refugees would not go back to areas under their control. “We want to create conditions that will be suitable for them to return where they will feel safe.”