Westminster Bridge attacker Khalid Masood sent a WhatsApp message that cannot be accessed because it was encrypted by the popular messaging service, a top British security official said on Sunday. 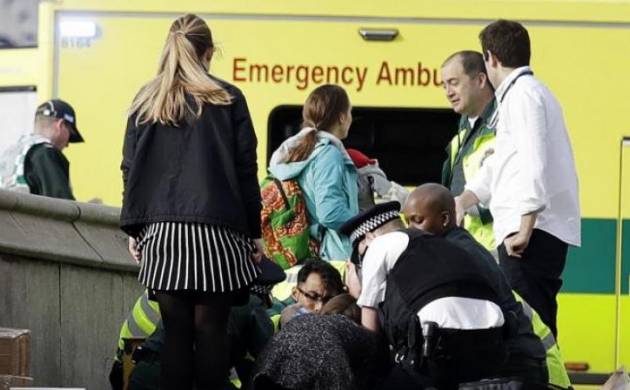 Westminster Bridge attacker Khalid Masood sent a WhatsApp message that cannot be accessed because it was encrypted by the popular messaging service, a top British security official said on Sunday.

As controversy swirled over the encrypted messages, police made another arrest in Birmingham, England, where Masood had lived.

The 30-year-old is one of two men now in custody over possible links to the attack. Neither has been charged or publicly named.

Masood was shot dead on the grounds of Parliament.

Home Secretary Amber Rudd used appearances on BBC and Sky News to urge WhatsApp and other encrypted services to make their platforms accessible to intelligence services and police trying to carrying out lawful eavesdropping.

“We need to make sure that organizations like WhatsApp, and there are plenty of others like that, don’t provide a secret place for terrorists to communicate with each other,” she said.

Rudd did not provide any details about Masood’s use of WhatsApp, saying only “this terrorist sent a WhatsApp message and it can’t be accessed.”

But her call for a “back door” system to allow authorities to retrieve information is likely to meet resistance from the tech industry, which has faced previous law enforcement demands for access to data after major attacks.

In the United States, Apple fought the FBI’s request for the passcodes needed to unlock an iPhone that had been used by one of the perpetrators in the 2015 extremist attack in San Bernardino, California.

The FBI initially claimed it could obtain the data only with Apple’s help, but ultimately found another way to hack into the locked phone.Masood drove a rented SUV into pedestrians on Westminster Bridge before smashing it into Parliament’s gates and rushing onto the grounds, where he fatally stabbed a policeman and was shot by other officers.

Police are trying to pinpoint his motive and identify any possible accomplices, making the WhatsApp message a potential clue to his state of mind and his social media contacts.

Rudd said attacks like Masood’s would be easier to prevent if authorities could penetrate encrypted services after obtaining warrants similar to the ones used to listen in on telephone calls or, in snail mail days, to steam open letters and read their contents.

Without a change in the system, she said terrorists would be able to communicate with each other without fear of being overheard even in cases where a legal warrant has been obtained.

Rudd also urged technology companies to do a better job at preventing the publication of material that promotes extremism.

She plans to meet with firms Thursday about setting up an industry board that would take steps to make the web less useful to extremists.