Pakistan Went Ahead To Call For Jihad, Encourage Violence In J-K: India's Rebuttal At UNHRC

The recent modification of Article 370 was "within our sovereign right and entirely an internal matter of India", the diplomat said, rejecting Pakistan's "hysterical statements" and demand for an international probe by the UNHRC into the Kashmir issue.

Pakistani leaders have gone ahead to call for Jihad and encourage violence in Jammu and Kashmir and third countries to create a picture of genocide, which even they know is far from reality, India said at UNHRC, amidst Pakistan Prime Minister Imran Khan's provocative anti-India statements. In a strong rebuttal to Pakistan's false allegations on Kashmir issue, Vimarsh Aryan, First Secretary in the External Affairs Ministry, said, "Jammu and Kashmir has been, is and will remain an integral part of India".

The recent modification of Article 370 was "within our sovereign right and entirely an internal matter of India", the diplomat said, rejecting Pakistan's "hysterical statements" and the demand for an international probe by the UNHRC into the Kashmir issue.

Exercising its right to respond to Pakistan Foreign Minister Shah Mehmood Qureshi's statements at the 42nd session of the United Nations Human Rights Council (UNHRC) in Geneva, the MEA secretary further said, "Article 370 was a temporary provision of the Indian Constitution".

"We are not surprised at Pakistan's hysterical statements with false narratives aimed to politicise and polarise this forum (UNHRC). Pakistan realises that our decision cuts away ground from under its feet by creating obstacles in its continuing sponsorship of cross-border terrorism," he added.

The Indian diplomat from Jammu and Kashmir said Pakistan has the people of Kashmir are united to preserve the core values of democracy and Islamabad has "no locus standi to talk on Kashmir". He said at the UNHRC forum, Pakistan has pretended to speak as the voice of the global community on human rights.

"But the world cannot be fooled. Pakistan's gory record speaks for itself. This rhetoric will not distract international attention from Pakistan's persecution and elimination of religious and ethnic minorities, be it the Christians, Sikhs, Shias, Ahmadiyas and Hindus," Aryan said, adding that the persecution of minorities in Pakistan is well documented.

Earlier at the session, Pakistan Foreign Minister Qureshi demanded an international investigation by the UNHRC into the situation in Kashmir and urged the world rights body not to remain "indifferent" after India revoked Jammu and Kashmir's special status. 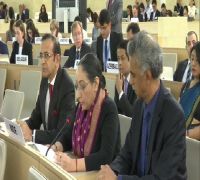 Restrictions Being Eased In Kashmir, Allegations Of Pakistan False And Concocted: India At UNHRC 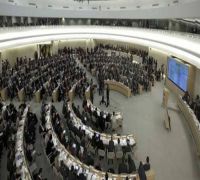 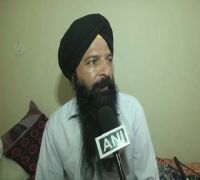